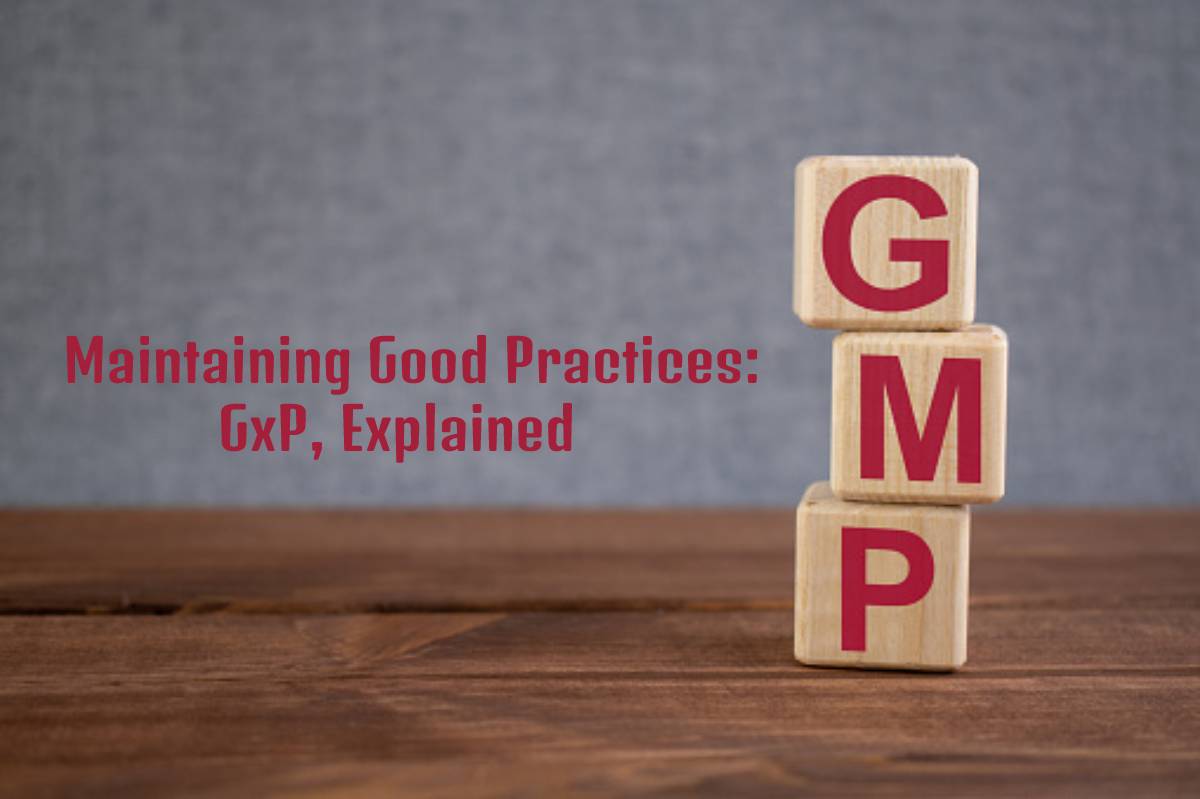 GxP is an abbreviation for “good practices”.  The “x” is used as a placeholder for the specific noun or verb used to describe what is being discussed.  The way the “x” is used varies depending on the industry or process being described.

These practices include guidelines for the stages of the processes used to produce nearly everything.

In this blog, we’ll look at specific examples of GxP and explain why GxP is important for many industries.

GxP are industry-wide accepted best practices.  For example, a pharmaceutical manufacturer in Shenzhen should use the same practices as manufacturers in Oslo or Houston.  The practices are defined not only by laws and regulations but also by the industries themselves.

When referring to GxP, whether it’s GMP, GDP, GCP, etc., the organization is stating that they recognize international standards and adhere to them.

cGMP refers to the most current technology and techniques.  This is used as a code by the US Food and Drug Administration (FDA) and other government agencies in the US and around the world.

cGMP refers to the concept that written laws often can’t keep up with changes within an industry. For example, a new, safer method of manufacturing a drug might be developed.  It might take the FDA a year to write laws regarding it.  If Congressional activity is needed, that might take 5 to 10 years.

By referring to “current Good Practices,” both governments and industries acknowledge that science, engineering, and industry leaders are often years ahead of regulations.  Most inspections and certifications are for “current” practices, not simply for meeting the current regulator law.  The laws on the books, particularly in the United States, are the bare minimum regulations and standards a company needs to meet.

The Foundation of Business

For any company to survive in these regulated industries, GxP must be an integral part of the firm’s operations.  It’s vital that all areas of the company, including management, have their finger on the pulse of changes. Since it’s realistically the “current ” GxP by which a company is judged, the leadership must keep up with changes as they occur.

In the food production and storage industries, recording temperatures has always been and continues to be vital to operations. The temperature of a space has a profound effect on the quality and safety of food.

Accurate measurement of temperatures is vital.  As Food Engineering Magazine points out, “it’s not necessary to record temperatures manually on clipboards or even to use a decades-old chart recorder.”  Modern digital data loggers not only track temperatures but also transmit that information to a central computer system that analyzes the data.  This data is used to alert the appropriate person of any major concerns and provides inspectors with a 24-hour a day, 365-day a year record of the temperatures in the space.

In the pharmaceutical industry factors such as temperature, humidity, and airborne contaminants can all be factors in the quality of the drugs produced.  The FDA issues cGMP guidelines, like these, for every regulated industry.

Recording environmental factors doesn’t stop with the manufacturing floor.  GDP, Good Distribution Practices, are as important as GMPs or cGMPs.

In the lettuce example above, safe temperatures need to be maintained from the moment of harvesting to sale to the consumer.  Reefer trucks and containers are standard for transportation of foods around the world.

GxP is important even in industries that aren’t heavily regulated for safety.  For example, in electronics, even though there are no regulations regarding temperatures or humidity, the industry has adopted monitoring out of necessity. If humidity is too high, it can cause condensation on electronics that will lead to electrical shorts.  If the humidity is too low, it can allow static electricity to form thus frying circuits.  At temperatures that are too low, plastics freeze and become very brittle.  At high temperatures, plastics can become soft and deform.  The high tech industry has a vested interest in monitoring internal environmental conditions as much as food and drug producers.

ISO standards are created by the International Organization for Standardization.  A private entity, ISO has created standards for many business practices that allow companies and even single factories to receive certification if they meet or exceed those standards.

Receiving ISO certification is not, however, a guarantee that a firm can meet legal cGmP standards.  ISO standards often include such factors as customer satisfaction, whereas legal standards, like GMPs imposed by the FDA, don’t include customers, but are much more complete on safety and risk management for manufacturing, storage, and distribution aspects.

One of the best ways to ensure a facility or firm meets current GxP standards is to get a third-party inspection.  Certain auditing firms provide detailed audits and reports of a firm’s standards so anyone outside of the organization can learn what rules and standards a company within an industry should be following.

This type of outside audit provides the objectivity needed to help drive GxP standards for any firm.

GxP should be more than simply another set of regulations a firm needs to meet. Those standards often protect a company from lawsuits, make it more efficient, and reduce waste and loss.

By using automated monitoring and procedures, made easier to record with digital data loggers, companies can provide the documentation they need without incurring a great deal of additional labor costs.